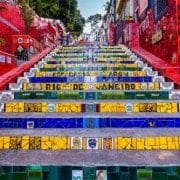 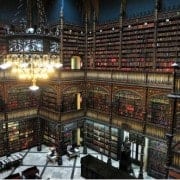 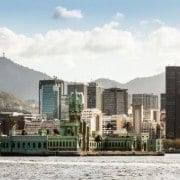 BY BETSY GOLDBERG FROM VIRTUOSO

Long after it hosts the 2016 Summer Olympics, the world travel spotlight will continue to shine on Rio de Janeiro as a result. Visitors to the “Marvelous City” wouldn’t dream of missing its best-known attractions, including the Christ the Redeemer statue, Sugarloaf Mountain and Copacabana and Ipanema beaches. But those visitors might unknowingly pass up the chance to see some of the hidden treasures in Rio.

Here are eight don’t-skip gems that locals prize (but many travelers miss):

In 1983, Chilean painter and sculptor Jorge Selarón moved to Rio’s Lapa neighborhood. In 1990, on a whim, he started decorating the eroding staircase outside his home with tiles and pieces of porcelain he scavenged from construction sites and piles of waste he found on the streets. which he would sell his paintings to fund the mosaic.

Within 10 years, the 215 steps had become a vibrant, colorful work of art. They’d also become an all-consuming and ongoing labor of love for Selarón.

The steps are covered with more than 2,000 tiles donated from over 60 countries. Selarón painted about 300 of them with the image of a pregnant African woman. Also look out for tiles depicting Princess Diana, Barack Obama and Hindu gods.

Selarón called the steps his tribute to the people of Brazil. He continued to change the tiles until his death in 2013.

This public park is off the beaten path, so it’s undiscovered by most travelers. It’s home to a historic mansion once owned by an industrialist and his wife, a celebrated singer. Remodeled by an Italian architect in the 1920s, the home resembles a European royal palace. Today it’s been converted into an art school. Stroll through, enjoy the students’ creations, and enjoy a meal in the courtyard café alongside a pool.

As well, explore the grounds of the national heritage site, which include English gardens, ponds, old stables, a fountain, bridges, a playground, and an aquarium housed in an artificial cave.

Lage Park is nestled in the subtropical forests of Tijuca National Park in the Jardim Botanico neighborhood. If you’re feeling energetic, find the hiking trail that leads to the top of Corcovado. You’ll pass by waterfalls on your way up the mountain. While you hike, keep an eye out for monkeys and toucans in the trees above the trail.

You’d never know that one of the hidden treasures in Rio exists on a rough-looking downtown road, offering a historic respite from the bustle of activity on the street outside. Three immigrants founded the Royal Portuguese Reading Room in 1822 to bring the literary tradition of their homeland to newly independent Brazil, formerly a Portuguese colony.

Opened in 1887, the Royal Portuguese Reading Room contains 350,000 books, along with art, maps, medallions and coins, from the 16th through the 18th centuries. It includes rare original manuscripts and unique proofs. The collection is the largest of Portuguese works outside of Portugal. And the number of works is still growing; the institution receives 6,000 new titles each year.

The elegant room was designed in the Gothic-Renaissance style popular at the time. Wooden bookcases crowded with tomes extend up three stories on each wall to an iron chandelier and stained-glass skylight. Carved wood balconies and posts add to the ornate Old World grandeur.

Head for the water where the locals do. Pass on Copacabana and Ipanema and go instead to the western part of Rio. Grumari is what some call the city’s most secret beach. You’re in for about an hour’s drive, but you’ll be rewarded with beautiful ocean views along a coastal road. You’ll need a taxi or rental car, as there’s no public transportation.

As Grumari is a nature reserve, you won’t find restaurants, hotels or shops. Bring your own food and drink if you’re staying a while. What you will find there: nearly two miles of white and red sand. Fans rave about Grumari’s cleanliness and natural beauty. And even though local beach bums frequent it on weekends, you’ll have more of it to yourself during the week.

Rio is one of the world’s most gorgeous cities. To fully appreciate its beauty away from the crowds, head to Dona Marta Lookout. It’s a helipad and an observation deck on the road from the beaches to the Santa Teresa neighborhood. And because it’s not well-known, it qualifies as one of the hidden treasures in Rio.

From your cliffside vantage point, you’ll see all the landmarks: Sugarloaf, Christ the Redeemer, white sand beaches and downtown. You may even get a bonus: huge foot-long lizards and monkeys in the trees around you. Snap away to your heart’s content – your friends on social media will be wowed.

On the hill above Rio’s harbor perch the church and monastery of São Bento. Built between 1617 and 1641, the complex houses one of the country’s finest colonial churches. From the outside, it appears simple, even austere. But inside, the Baroque interior is sumptuously decorated with abundant wooden wall and ceiling carvings. The gold leaf of the altar gleams as it beckons visitors for a closer look. Elaborate chandeliers hang in the chapel.

Monks who were the Benedictine order’s finest artists of the day fashioned the interior. Their works include the figures of St. Benedict and St. Scholastica on the high altar, painted tiles depicting the lives of Benedictine saints and paintings such as Christ of the Passion in the sacristy of the monastery. As if the sights inside weren’t enough, you’ll also enjoy a breathtaking view outside. After visiting, you’ll know why this is one of the hidden treasures in Rio.

Located in the bohemian Santa Teresa neighborhood, Ruins Park began life as the home of a wealthy patron of the arts. Her mansion, built in 1908, was a gathering place for artists and intellectuals. Today the ruins of the home remain. But its original spirit lives on, as Ruins Park has been reborn as a venue for art, music and open-air performances.

You can enjoy coffee and great desserts at Café Ruins. There’s also a gallery on the ground floor of the old mansion. But the best part of your visit will be the vista from the platform on top. You’ll get a birds’-eye sight of central Rio and Guanabara Bay.

Away from the energy of Rio, this tiny island off the city in Guanabara Bay houses another of the hidden treasures in Rio: a green neo-Gothic castle. Built in 1889, the building was the headquarters of Brazil’s customs service. Today it’s a museum of Navy history, where visitors can admire the hardwood mosaic floors, intricate stained glass, and the Ceremonial Room now used for Navy formal events.

hidden treasures in rio: fiscal island and its green castle with buildings of downtown rio behind and water in foreground
The Gothic castle of Fiscal Island stands out against the modern backdrop of downtown Rio
The castle holds historical significance for Brazilians. It was the site of the last Imperial Ball on November 9, 1889, which Emperor Pedro II attended along with thousands of reported guests. Six days later, the monarchy was overthrown, and Brazil transitioned to a presidential republic.

See Hidden Treasures in Rio for Yourself. Call us today. We’d love to create your perfect Rio itinerary! 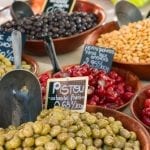 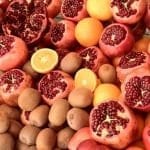