You are here: Home / Tribes & Traditions of Ethiopia

Ethiopia is a fascinating yet rugged and mysterious country.   Having largely avoided European colonialism, Ethiopia retains a strong cultural identity that can be felt everywhere you go.  Bring your sense of adventure with you and uncover the wonders before mass tourism arrives.

Pack a sense of adventure on this exclusive journey which combines the rich history, culture and landscapes of the north with the tribal heritage in the south.  You’ll visit the source of the Blue Nile, see the skeleton of ‘Lucy’ and spend a night in the Simien Mountains.  There is rare wildlife amidst high peaks, extraordinary rock-hewn churches, World Heritage sites and an incredible number of different ethnic groups in and around the Omo Valley.  You’ll explore their villages, learn about local customs and wander through bustling markets.

Presentation of Tour Itinerary by Patrick Clementson from Abercrombie & Kent

Tribes and Traditions of Ethiopia will be hosted by Claudia Rossi Hudson & Roger Hudson,
owners of Mary Rossi Travel.

9-24 November, 2020 starting and ending in Addis Ababa.
Please let us know if we can assist you with your flight bookings and pre or post tour travel. 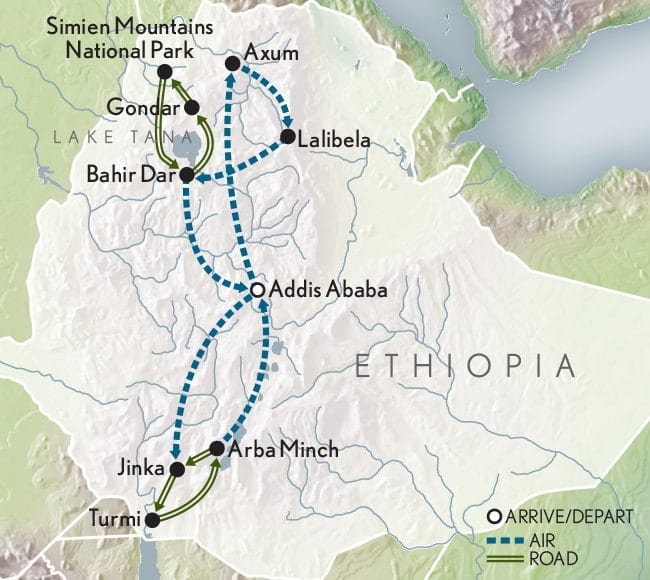 Explore the markets, churches, museums and palaces of Addis Ababa

Venture to the source of the Blue Nile

Soak up breathtaking vistas and drink coffee like a local

Hike through the rugged Simien Mountains in search of rare wildlife

Marvel at the remarkable stelae and tombs of ancient Axum

On arrival in the Ethiopian capital you are met by an A&K representative and transferred to your hotel.
Sheraton Addis Ababa | Meals: D

Your adventure begins with a panoramic introduction to the city from the summit of Mt Entoto (3,200 metres). Stop for a steaming cup of Ethiopian coffee on the way and, after admiring the view, take a glimpse inside the Entoto Maryam Church, which was constructed by Emperor Menelik II. Step inside the small local museum and the Menelik Palace and, on the way back admire traditional textiles and garments at the Shero Meda Market. This afternoon, visit the National Archaeological Museum, where the 3.2 million-year-old bones of Lucy (a female Australopithecus afarensis skeleton) reside, followed by the Ethnographic Museum. Celebrate your arrival at a welcome dinner.
Sheraton Addis Ababa | Meals: BLD

Fly to Axum, the oldest city in Ethiopia, in the far north of the country. Considered one of the four great powers of the ancient world, Axum was an important centre of trade and innovation. Venture to the impressive World Heritage listed stelae fields and marvel at the enormous obelisk-like structures. See the royal tombs and ruins of ancient castles before heading to the Axum Museum and Mariam Tsion Church, built on the site of Ethiopia’s first church. A chapel within the church compound is believed by Ethiopian Orthodox Christians to house the Ark of the Covenant, or the original tablets of Moses.
Sabean International Hotel | Meals: BLD

Fly south to the small town of Lalibela, home to one of the world’s most astounding sacred sites comprising eleven medieval rock-hewn churches. Visit the first group via a network of labyrinthine tunnels and crypts which connect the galleries and grottos. Pause at Bet Medhane Alem, the largest, which has been constructed like a Greek temple and Bet Giyorgis (Church of St George) which is probably the most elegant and majestic of all, also accessed via a tunnel.
Mezena Lodge | Meals: BLD

Another day exploring Lalibela’s extraordinary churches. The southeast cluster is more irregular in design than the rest and several are thought to have been secular in origin, and some predate the reign of King Lalibela by five centuries. After lunch, visit the monastery of Nakuto Le’ab, a simple example of rock hewn church. Late in the day visit the open-air market and experience warm Ethiopian hospitality at a traditional coffee ceremony. Mezena Lodge | Meals: BLD

Fly to Bahir Dar and transfer to Gondar, the capital and commercial centre of Ethiopia from the 17th to mid-19th century. Explore a number of castles in the royal enclosure before visiting Debre Berhane Selassie church, the only church saved from the Mahdist invasion in the 1880s. Admire the wonderful murals and in particular the angels’ faces which have become a common motif in Ethiopian design. Continue to the bath of Emperor Fasilides, now best known for the annual Christian festival of Timkat where local worshippers descend into the pool to commemorate the baptism of Jesus. Nearby is a small mausoleum said to have been built for the king’s favourite horse.
Gondar Hills Resort | Meals: BLD

This morning drive northeast to the Simien Mountains National Park and your lodge on the edge of an escarpment with breathtaking views. In addition to the spectacular scenery, the park is well known for its unique animal and birdlife including the Walia ibex, Ethiopian wolf, Menelik’s Bushbuck and the Gelada baboon which are endemic. Head out on foot in the hope of getting close to a troop of Gelada monkeys with additional time spent exploring the beautiful park.
Limalimo Lodge | Meals: BLD

Drive through fertile countryside this morning to Bahir Dar, on the southern shore of Lake Tana, the source of the Blue Nile. Stop in villages along the way before visiting the 100-metre-wide Tis Isat Falls (Blue Nile Falls).
Kuriftu Resort and Spa | Meals: BLD

Board a local boat for the trip across Lake Tana to nearby Zeghie Peninsula to visit two 14th century monasteries. They are renowned for their round, grass roofed churches and the magnificent murals inside which depict scenes from the Old and New Testaments.
Kuriftu Resort and Spa | Meals: BLD

Take a flight southwest to Jinka where your first stop is Yetnebersh village to watch how the Ari distil their own liquor from sorghum, garlic and maize. Stop in at the South Omo Research Centre and museum which focuses on the many ethnic groups living in the region.
Eco Omo Lodge| Meals: BLD

Spend the next two days in the South Omo focusing on the fascinating range of ethnic cultures there. Visit a Mursi village where you learn something of their unique customs including lip plates and large decorative ear plugs. Meet the proud Hamar, known for their body decoration, moonlight dances and bull-jumping, and the Karo, recognisable by their elaborate body scarifications and lower lip piercings. They are considered masters of body painting when preparing for a dance, feast or celebration.
Buska Lodge | Meals: BLD

This morning drive to Arba Minch pausing to admire the beautiful terraced hillsides of the Konso people who are also well known for their woven materials and the carved totems which decorate their graves. This afternoon spot hippos and Nile crocodiles during a boat trip on Lake Chamo and finish the day in Chencha village, home to the Dorze whose tall beehive- shaped dwellings are among the most distinctive traditional structures in Africa.
Haile Resort | Meals: BLD

Return flight to Addis Ababa and transfer to your hotel. In the evening freshen up before a farewell dinner.
Sheraton Addis Ababa | Meals: BLD

This morning transfer to the airport for your departure flight.
Meals: B

All accommodation in Ethiopia is as detailed on a double/ twin share basis with private facilities; meals as specified; bottled water during transfers and touring; airport welcome; assistance with luggage and group transportation by private air-conditioned vehicle; services of English speaking A&K Resident Tour Director; economy flights only if specified as included in itinerary, all entrance fees, planning, handling, operational and communication charges, all tipping.